Beware the Ides of March...

At tonight's ANC 6D's monthly business meeting, Sean McCarthy from the Office of Property Management (OPM) stated that MPD will start moving into their new District 1 HQ at the former Bowen Elementary School on March 15th, with tours of the facility available for the community in April. McCarthy and Commander David Kamperin from MPD were at the ANC meeting to get approval for a public space permit before going to a zoning hearing next month. They need approval for 17 parking spaces inside MPD's property along Delaware Avenue that already exist, but since the original construction of the spaces was done without getting proper approvals years ago when Bowen was still a school, OPM needs to go through the proper channels to get the spaces approved, which sounds like a technicality to me. There will be a total of 182 parking spaces available to police personnel at the new HQ, compared to 75 spaces at the current HQ, which should have less of an impact on street parking surrounding the new HQ. There will also be four spaces on Delaware Avenue for use by visitors, which won't be metered like the spaces in front of the old HQ building. Instead of meters, these spaces will have a 15-minute to 30-minute time limit, depending on the type of business a visitor needs to do at the HQ. Along with the parking spaces, a seven-foot iron fence will be installed along the Delaware Avenue elevation and part of the M Street elevation, with three gates along Delaware Avenue. It was unclear if there would be fencing on the other elevations as well. The metal fence, while offering security, will give the new HQ building a more open feel than the 10-foot brick wall that is at the current HQ on 4th Street. Lighting will be installed in the parking lot using down lighting, which shouldn't cause light pollution to the neighboring residential buildings. After a little discussion, the ANC approved the public space permit items in a 6-1 vote, with Commissioner Sobelsohn abstaining. 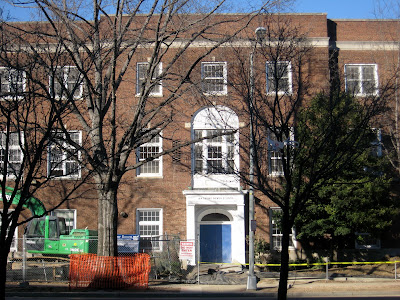 Here's a photo taken yesterday of the entrance to the new District 1 headquarters building at 101 M Street, which is still under renovation.
A second vote related to the community space agreement between MPD and the ANC was approved unanimously. The community room at the new HQ was described to be slightly larger than the sanctuary at St. Augustine's where tonight's ANC meeting was held, and will have items including a 20' x 20' A/V screen, ports for Internet connectivity, and three microphones. Some of the activities that MPD wants to organize, especially for neighborhood kids, include a summer camp, summer school, and movie screenings, among other things.
Posted by SWill at 11:13 PM