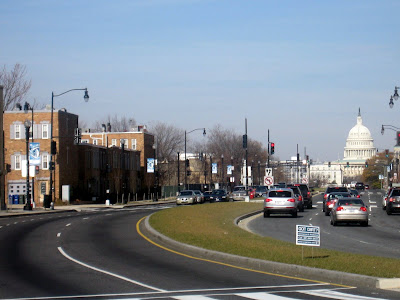 Here is what the southern section of the South Capitol Street corridor looked like as of December 2008, which was the result of the "Extreme Makeover" that DDOT did to the street back in 2007-08 in anticipation of the opening of Nationals Park. The area north of Nationals Park will get similar treatment in Phase II, including a grassy median, wide sidewalks, and street furniture. As for the new Douglass bridge, my preferred design of the stayed bascule bridge was not chosen. Instead, we will be getting an arched bascule bridge, similar to Arlington Memorial Bridge, which connects Arlington Cemetery and the Lincoln Memorial. The new Douglass bridge will be six lanes, contain a draw span, and will be located slightly downriver from the current bridge. It will be connected on the north with a traffic oval and a traffic circle on the south. 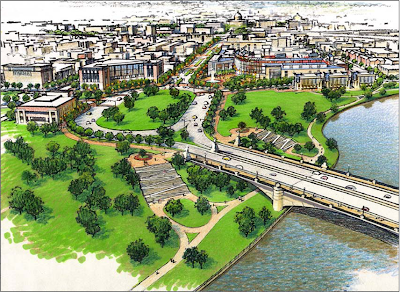 Here is a rendering of the traffic oval planned at the intersection of South Capitol & Potomac Avenue and the approach to the new arched bascule-designed bridge, from the 1/7/09 Anacostia Waterfront Inter-Agency Coordination Briefing slide show. The Environmental Impact Statement should be complete by the spring, but a construction start date hasn't been announced yet. There will probably be a presentation to ANC 6D in February, so we should find out then when construction is supposed to begin.
Posted by SWill at 8:44 AM