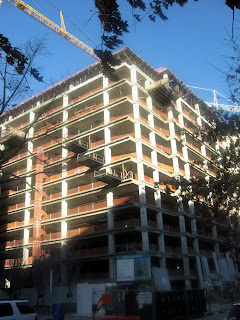 Thanks to reader Curtis for the tip that Biznow recently had a feature on the topping off ceremony at Patriots Plaza that occurred last Friday. Back in December, Southwest...TLQTC had a post showing updated photos at phase II and phase III of Patriots Plaza. In the Biznow article, it describes some of the security features Trammell Crow implemented at the two buildings:

30' setbacks, shatter-resistant windows, and a lobby designed to blow air pressure outward during a blast. Trammell can lease each building as an individual facility or combine Phases II and III into one, which is what they proposed to DoJ before it landed in NoMa.

Phase II & III are scheduled to deliver in September and no tenants have been lined up yet, however, they are targeting the GSA as a potential tenant. The article also mentions other developments in the area, including Constitution Center, the CFL, and the two parcels the DC government is offering up to developers, all of which has been written about in this blog. (The above photo shows phase II of Patriots Plaza back in December 2008)
Posted by SWill at 10:54 PM