The Washington Post reports that DCFD's main fireboat the John Glenn was damaged in a collision with The Spirit of Washington cruise boat in the Washington Channel. From the article:

The Spirit of Washington cruise boat struck the District's main fireboat today while the latter vessel was docked, gashing a 15-foot-hole in the fireboat and disabling it for the foreseeable future, fire officials said. There were no passengers aboard the 600-person cruise boat, and no one was injured in the 2 p.m. incident, along Pier 4 at 6th and Water streets SW, authorities said. The collision occurred as the four-person crew of the Spirit of Washington performed a routine maneuver to reposition the ship alongside the pier, said Sal Naso, vice president and general manager of the Spirit Cruises. "They were just turning it around," Naso said. "It's done a thousand times a year. We're obviously going to take care of the fire department." Naso said damage to the cruise boat was minimal. The company substituted another boat, the Spirit of Mount Vernon, for its scheduled dinner cruise. Alan Etter, spokesman for the District's Fire and Emergency Medical Services Department said the damage to the 70-foot John Glenn was "considerable." The gash was on the starboard side, above the water line, and will have to be fixed before it can be returned to service, he said.

The U.S. Coast Guard is investigating the accident. Below is a photo of the John Glenn, one week after the accident. I couldn't get any closer in order to see the gash on the boat. 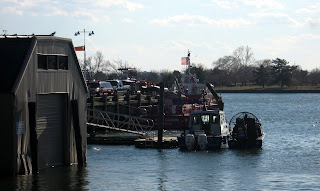