By foot: The Inauguration Day 2009 website created by the District government states the following pedestrian routes are available to get to the swearing-in ceremony:

The following access points have been identified as pedestrian-only routes to the National Mall: 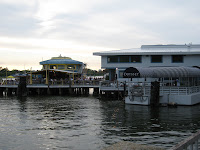 By sea (ok, river): For those of you coming into DC from Northern Virginia, I heard on NBC4 this morning that there will be water taxi service from Old Town Alexandria to the Southwest Waterfront. From the NBC4 website:

The U.S. Coast Guard says it has approved water taxi service from Virginia to D.C. on Inauguration Day. The Inaugural Water Taxi will be provided by the Potomac Riverboat Co., for $90 roundtrip or $50 one way. The taxi will depart from the Alexandria City Marina at Union and Cameron streets in Old Town Alexandria and arrive at the Southwest Waterfront's Pier 4, at 600 Water St. in D.C.

600 Water Street is where Cantina Marina is located and the Odyssey is docked. Tickets go on sale today and can be purchased on the Potomac Riverboat Company's website. (The above photo is of Cantina Marina and the Odyssey dock, taken in July 2007)
By bicycle: A press release today from DDOT states that there will be two free bike valet parking stations available - one will be on the south side of the Jefferson Memorial and the other will be on 16th Street, NW between I & K Streets. From the press release:

Both sites are within walking distance of the Inaugural festivities and will be open from 7 a.m. to 5 p.m. A limited number of commemorative valet claim checks and spoke cards will be offered to cyclists who use the valets. WABA says the service will operate like a car valet. “You simply ride up to the valet, a volunteer will attach one half of a claim ticket to your bike and hand you the other half,” said Henry Mesias, the project manager at WABA. “The volunteer will then park the bike in a safe enclosure while you head off to enjoy the Inauguration. When you want to leave, you show us your half of the claim check and we get you your bike and you ride off. It’s quite simple.” The sidewalks on all bridges over the Potomac and Anacostia Rivers will be open to bicyclists and pedestrians, and the Memorial Bridge will be dedicated to bicyclists and pedestrians. Cyclists coming from Arlington, Alexandria, Southeast and Southwest DC can use the valet station at the Jefferson Memorial, while riders from the north can use the station at 16th and K Streets, NW.

By Metro: According to the WMATA website, Metrorail will be running rush hour service on Inauguration Day from 4am to 9pm and commemorative passes & SmarTrip cards are available for purchase. The Smithsonian Metro station will be closed, so the closest Southwest stations to the National Mall will be L'Enfant Plaza and Federal Center SW. Those stations serve all rail lines, except for the Red Line. (The above map shows the Metro stations and bus routes near the National Mall, from the WMATA website)