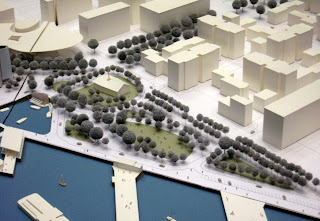 - DCMud posts a story on parks that are planned around the District. The post briefly mentions the park space planned at the Southwest Waterfront. The above model shows the public park planned on the south portion of the Southwest Waterfront redevelopment. The building in the middle of the green space is St. Augustine's Episcopal Church, which isn't a part of the redevelopment. The roof of Arena Stage is also visible on the top left corner of the model.

- DCist reports that public meetings will be held over the next couple of weeks to discuss the city's Neighborhood Circulation Study. According to the website, the focus of the study is: " Identify current deficiencies in neighborhood transit connectivity; Improve local bus services to enhance neighborhood circulation as well as connectivity; Identify new neighborhood services which will enhance circulation and connectivity; and, Complement the long-range growth of DC’s transit system." The Bellevue area will have its meeting on Tuesday, December 16th at 6:30pm at The Specialty Hospital of Washington -Hadley located on Martin Luther King Jr. Avenue.
Posted by SWill at 11:24 PM

What's your e-mail address and/or the best way to get in touch with you? I'm doing some reporting on Southwest.

My email address is: southwest.tlqtc@gmail.com