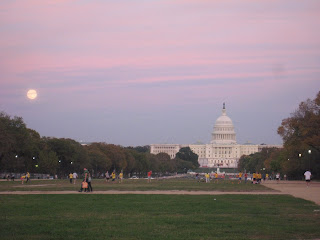 The Washington Post reports that the Feds are forbidding people from camping out on the National Mall on the night before the presidential inauguration. From the article: "To accommodate the crowd, the entire Mall is being opened to inauguration spectators for the first time, with Jumbotrons showing the noontime ceremony at the Capitol. Sgt. Robert LaChance, a U.S. Park Police spokesman, said that it is 'not legal to camp on the Mall' and that tents will be banned. Although the Mall is open 24 hours, it might be swept in a check for bombs during the night, he said. 'What we encourage people to do is come once public transportation is open,' he said. Metro will start running trains at 4 a.m. on Inauguration Day, a federal holiday in the District. Unlike at the Capitol or on the parade route, backpacks, chairs and strollers will be permitted on the Mall, he said. People can also take food and coolers there. But authorities are discouraging people from bringing many items on Metrorail because trains will be jammed." A pitched tent on the Mall could have been a cheap alternative for people compared to some of the accommodations offered on Craigslist.
Posted by SWill at 10:07 AM

Anyone traveling to or staying in DC for the inauguration might be interested in this guide: "Where to Pee in DC: An Insider's Guide for the Inauguration" Sounds goofy, but with the shortage of available bathrooms on and around the National Mall, this 7-page downloadable guide might be the best money spent on the event. Available on ebay for $3.75 (item # 120351046988).

Here at this site really the fastidious material collection so that everybody can enjoy a lot. top branding agencies

Hi I was searching for the blogs for many times, now I have reached at the right place.
php drug rehab

I have checked this link this is really important for the people to get benefit from.
vivitrol atlanta georgia

The complete blogs are really inconceivable and definitely everyone will share this information.
rehab centers in georgia

The complete blogs are really inconceivable and definitely everyone will share this information.
https://cineiglesia.com

You have touched good quality points here. In whatever way continue writing.
adtechps.com

It feels awe-inspiring to read such informative and distinctive articles on your websites.
porneroticcam.info

The blog is good enough I again n again read this.
multiple url opener for chrome

I feel happiness to read the content that you are posting.
uk phone number

I would be supportive on all your articles and blogs as a result of they are simply up to the mark.
lolcostume.com

Your contents are too straightforward to browse and easy to understand.
HealthfulLivingIntl.org

You create sense out of the foremost complex topics.
CBD capsules