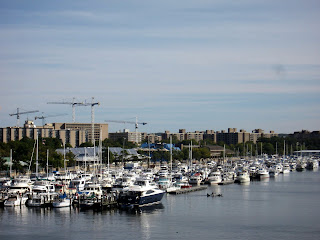 In today's Washington Business Journal, there's an article (subscribers only) giving some background to the delays in getting the Southwest Waterfront parcels transferred from the city to the Hoffman-Struever development team. The delay stems from a disagreement between At-large Council member Kwame Brown and Deputy Mayor for Planning and Economic Development Neil Albert. From the article: "The delay over the Southwest waterfront involves a bill that would allow the mayor to convey 16 acres to a development team led by D.C.-based PN Hoffman Inc. and Baltimore-based Struever Bros. Eccles & Rouse. After complaining he had not received the full agreement from the mayor over the summer, Brown scheduled an Oct. 8 hearing on the bill. Citing the Jewish holiday Yom Kippur, he adjourned the hearing and took no action until the meeting with the council chairman. Before that meeting, Brown said he had no confidence the developers could execute the project in this financial environment. He also said the affordable housing component is inadequate and the equity offered to the team’s small, local and minority-owned companies is a 'slap in the face' to them, even though four of their executives testified that they are pleased with their involvement in the project. 'I fundamentally have issues with a number of areas of this transaction,' Brown said...Although Brown eventually agreed to hold the hearing, he still maintains that Albert and his team 'don’t really care how projects get done. They just want them to get done. I want to make sure that they actually benefit residents.' He reconvened the hearing, he said, because 'I don’t want to be seen as the one holding up the project.'" That hearing was held yesterday at the Wilson Building. Once I get a chance to listen to it, I'll report any new and interesting developments.

Update: The WBJ has another article from Friday that says Council member Brown wants to change some of the terms of the land transfer. From the article:"...Brown is expected to propose new measures to protect affordable housing, require an independent appraisal of the land value, create a deadline for the developers to get a financing commitment and allow the land to return to District control should the development fail. He was vetting the idea with fellow council members Friday afternoon." Brown wants to introduce these changes using emergency legislation at the Council's last meeting of the year on December 16th. The drama continues!
Posted by SWill at 9:06 AM