Delays and Progress in the Neighborhood 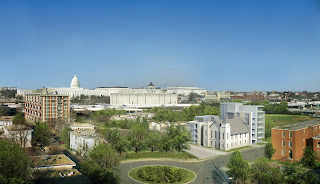 In today's Washington Post, there's an article describing the slowdown in construction around the Washington metro area due to the credit crunch. The Randall School project is mentioned in the article. From the article: "A half-mile from the ballpark, the Corcoran Gallery of Art and developer Monument Realty intended to turn what was once a public school and then a homeless shelter into an art school and apartments. But Monument withdrew in August, as its equity partner, Lehman Brothers, collapsed, leaving Corcoran to find another developer." Southwest...TLQTC reported on this story back in November. Another victim of the delay at Randall School is the old Friendship Baptist Church site (AKA Square 643) at 734 1st Street (H Street & Delaware Avenue). Developer Steve Tanner has plans to renovate the historic church into office space and build a residential component behind the church, which has been in the works since at least 2003. The timing of delivery, though, is dependent on the completion of the Randall School project. Now that the Randall School is delayed, Tanner will have to wait to see who will be the new developer partner of the Corcoran. The old Friendship Baptist Church is over 100 years old and was one of the few structures saved when Southwest was razed during urban renewal in the 1950s. According to the Cultural Tourism DC website: "In December 1902 the congregation dedicated a new church at 734 First Street, SW (at H Street). The eclectic Victorian style structure, built by James A. Boyce over a 12-year period, had Romanesque, Gothic Revival, and Queen Anne elements. A name change -- to Friendship Baptist – in June 1905 followed the congregation’s move...In September 1965 it celebrated its 90th anniversary and dedicated a new building at 900 Delaware Avenue, SW. The old Friendship Baptist Church at 734 First Street, SW, was designated a DC Historic Site on May 27, 2004." A rendering of the site is above - the white church is the existing building and the Shalom Baranes-designed 7-story residential addition is at the rear of the church (rendering courtesy of Steve Tanner).

At least one major Southwest project is moving ahead. Waterfront Station received construction financing in September to build the two new office buildings as a part of phase one of development, but the fate of the adaptive reuse of the old EPA towers to residential is unclear. 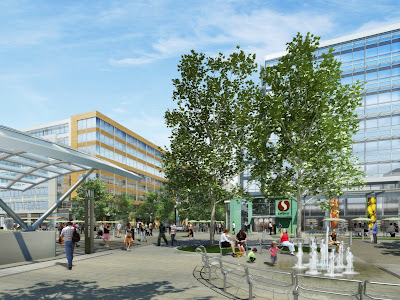 The rendering above is the metro plaza in front of the new SW Safeway under construction at Waterfront Station, courtesy of Vornado.