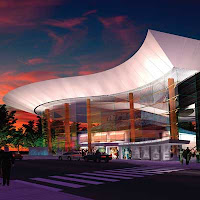 - Arena Stage receives additional $10 million in funding from the D.C. Council, according to an article from this week's Washington Business Journal. This is in addition to the $5 million it received from the city back in 2006. Construction is moving along and the new Arena Stage at the Mead Center for American Theater is set to open by 2010. As a matter of fact, Stage Banter: The Arena Stage Blog reports that there was a "Topping Out Celebration" on December 13th. (The rendering is the new Arena Stage from the Arena Stage website)
- The Corcoran Gallery of Art is offering free admission (normal admission is $14) to residents of ANC 6D on Friday, December 26th at the second annual Randall Neighbor Day 2008. ID is required in order to prove residency. The Corcoran is located at 500 17th Street, NW. I went last year to see the Annie Liebowitz and Ansel Adams exhibits, and both were excellent. This year, in addition to the permanent collection, there are special exhibits, including Richard Avedon: Portraits of Power and Wounded Cities Portraits by Leo Rubinfien. Randall Neighbor Day was one of the community benefits that the ANC negotiated with the Corcoran as a part of their PUD submission last year. Southwest...TLQTC posted back in November that the Corcoran's development partner Monument Realty pulled out of the Randall School deal, but the Corcoran was looking for a new partner.
Posted by SWill at 2:05 PM