DDOT has started compiling old photos of streets and buildings in the District. I found a couple of photos of South Capitol Street from the 1950s. The first photo of SoCap is a northbound perspective towards the Capitol Building at the intersection of South Capitol and what is currently Washington Avenue. This photo was taken in 1950. 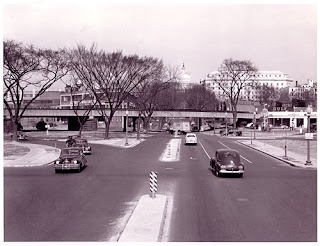 The second photo is a southbound perspective of SoCap taken back in 1957. It looks like the photo was taken near the intersection with N Street. In the distance is the old viaduct that led to the Frederick Douglass Memorial Bridge. 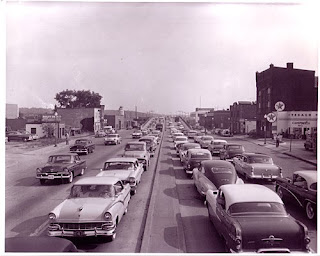 Back in the summer of 2007, the viaduct was removed during the "extreme makeover" of SoCap and the bridge undertaken by DDOT. Take a look at JDLand for details on the transformation of the South Capitol Street corridor (or possibly Taxation Without Representation Street) that took place in the lead-up to the opening of Nationals Park this spring.
Posted by SWill at 11:17 PM