In Wednesday's Real Estate Bisnow, the feature story is the progress at Waterfront Station, the redevelopment of the Waterside Mall at 4th Street and M Street. According to the article, the massive hole in the ground as seen from this web cam will reach grade in the next couple of weeks. So far, Safeway and CVS have signed long-term leases and the development team is working with Bank of America. Those same three tenants are the only ones that currently exist at the site. CVS and Bank of America were moved to temporary trailers in the parking lot in the wake of construction, while the Safeway is in a separate building that will be torn down once the new 55,000 SF urban concept Safeway opens in 2010. Demolition of the old Waterside Mall occurred on November 1st, 2007. Here is a photo of the stripped interior of the Mall the day of demolition: 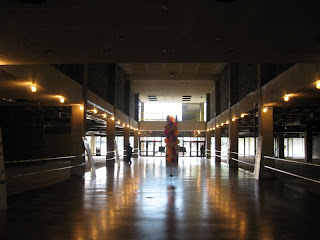 Here's a photo of the gold-painted wrecking ball taking down a portion of the east side of Waterside Mall: 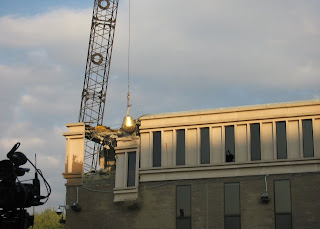 The first two office buildings that will house two DC Government agencies (the Office of the CFO and DCRA) are expected to open in 2010, along with two residential buildings. The residential buildings will be created from reskinning and retrofitting the existing office towers that once was home to the EPA. A reopened 4th Street will also run through the middle of the site.

Very exciting! 2010 can't come soon enough. I'll be curious to see how nice the new Safeway is. I'm guessing it will be along the same lines as what they're putting in City Vista