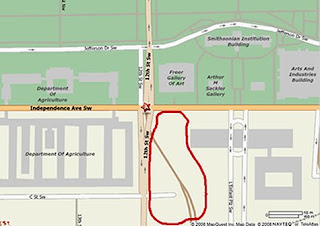 Not quite, but according to this week's Washington Business Journal (available to paid subscribers only), a vacant site at 12th Street and Independence Avenue next to the National Mall is being considered for the site of the National Women's History Museum. The vacant site could accommodate up to 300,000 SF of space. Currently, the site is owned by the GSA and bills are pending in Congress which would allow the GSA to sell the parcel to the museum. From the article: “'We will look to see whether we can move quickly to get the House or the Senate bill passed and then move to the other chamber,' said museum President Joan Wages, who is pushing the museum’s members to urge Congress to act. 'It will hopefully help us get the legislation passed before Congress leaves, targeting the last week of September.'” The National Women's History Museum currently isn't part of the Smithsonian, but once they secure a site, then they can petition the Smithsonian for an affiliation. Once Congress allows the sale to occur, the museum will need to raise $250 - $300 million in order to build the complex, so don't look to add this museum to the tour circuit any time soon...
Posted by SWill at 12:06 AM

Thanks for the great post. The NWHM is one of our clients and we're working them to raise greater awareness about the legislation before Congress to secure a home for the museum. You can show your support by sending a letter or email to Congress and/or post a badge on your blog or social networking site. Check that all out here: http://www.nwhm.org