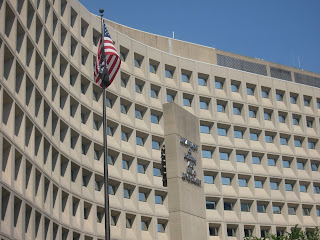 Per Greater Greater Washington: the Historic Preservation Review Board (HPRB) unanimously approved landmark status for the Department of Housing and Urban Development (HUD) headquarters, a 1960's-era Expressionist building designed by Hungarian architect Marcel Breuer. The HUD website states the following about the building: "Constructed from 1965 to 1968, the building is recognized as the first federal building in the country to utilize precast concrete as the primary structural and exterior finish material, as well as the first fully modular design for a federal office building...At its ceremonial opening, the HUD building’s bold aesthetic and technological advances were hailed with optimism as a turning point for public architecture nationwide." Taste has changed significantly since its opening. This building is now derided as cold and uninviting to its surroundings, which in itself is also cold and uninviting. In 1990, there was an attempt to enliven the plaza area in front of the building. Martha Schwartz, a landscape architect, was commissioned to redesign the plaza. Her efforts resulted in the saucer-like canopies and circular planters that now grace the front along 7th Street.
Posted by SWill at 9:32 PM No comments:

That's what the Washington City Paper states in its Hoods & Services section of the DC Neighborhood Guide that it published a couple weeks ago. The neighborhoods comprised of Southwest, Navy Yard, and Buzzard Point are lumped together under the heading "Nats Flats." The description of the neighborhood in the article isn't flattering...out of 23 neighborhoods profiled in the story, Nats Flats was ranked next to last based on some artibrary categories including Kid-Friendliness, Housing, Eats, Consumer Goods, Nightlife and Culture, and Intangibles. Nats Flats fared better than Drive Over Country, which includes neighborhoods along the banks of the Anacostia River including: Mayfair Parkside, Eastland Gardens, River Terrace, and Greenway. The highest ranked neighborhood is just to the northeast of Nats Flats, which is C-SPANistan (Capitol Hill, Lincoln Park, Stanton Park, and Rosedale). According to the article, the best category for Nats Flats is Nightlife and Culture. This is what the article stated about Nightlife and Culture in the area: "Well, again, you’ve got the stadium. And, although most of the museums are on the Northwest side of the National Mall, the Hirshhorn, Sackler, and Freer galleries, Air and Space, African Art, and American Indian museums are all technically on the Southwest side of the mall. Plus, there is Hains Point and the East Potomac Golf Course. On the nightlife front, there are mega-clubs H20 and Zanzibar, but the Waterfront after hours is best known for cruises on the Odyssey, which isn’t that cool of an outing, unless it’s prom night." The lowest ranked category is Consumer Goods. Here's what the article stated about Consumer Goods in the neighborhood: "Apart from the stadium and the slim pickings inside of the federal employment area and L’Enfant Plaza, which isn’t really considered part of the Waterfront/Navy Yard area, there is not much retail to be found in Southwest or the M Street section of Southeast." Isn't that the truth!
Posted by SWill at 8:59 PM No comments: 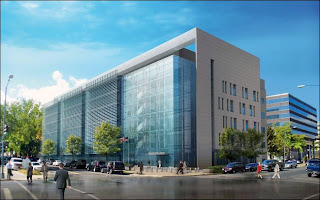 At Monday evening's SWNA (Southwest Neighborhood Assembly) meeting, Dr. William Vosburgh, the CFL's Laboratory Director, gave an update on the development schedule of the CFL. The CFL will be located at 4th and E Street, which currently is the site of MPD's 1st District Headquarters. The police station will relocate by winter 2009 to Bowen Elementary School at Delaware Avenue & M Street, one of the schools that was closed this year by the Schools Chancellor. Once the 1st District HQ moves to Bowen, construction of the CFL will begin. Construction should last about 30 months and by mid to late 2011, workers should start moving into the new facility. The CFL will be home to MPD's Crime Lab, the Office of the Chief Medical Examiner, and the DC Public Health Lab. A total of 300 - 350 employees will be housed at the facility. The Hellmuth, Obata + Kassabaum, PC-designed building will aim for LEED Gold certification and will cost $220 million to build. It will be 287,000 SF and 6-stories tall, will accommodate 160 underground parking spaces and 60 street-level spaces. The main entrance to the CFL will be on E Street, which faces the vacant lot the DC Government recently put out to bid (see earlier post).
Posted by SWill at 10:22 PM No comments:

In today's Washington Post, an article states that members from the U.S. Commission of Fine Arts were satisfied with design changes to the Martin Luther King Jr. Memorial planned for the Tidal Basin between the Lincoln Memorial and the Jefferson Memorial. The granite that will surround King's likeness will be moved forward a couple inches to give the impression that King is emerging from the granite instead of being placed into the granite. Wrinkles on his forehead will be removed and a hint of a smile will be placed on his face. Although the commission had concerns about King's arms being folded (they thought it made him look too confrontational and was reminiscent of the "Social Realist style" popular in communist countries), the folded arms will remain in the design. Construction is expected to start by the end of the year. The newest memorial to grace the National Mall is set for completion by Spring 2010.
Posted by SWill at 10:42 PM No comments:

Earlier this week, according to this article from the Examiner, FEMA officials decided to rescind its plan to expand the floodplain in Downtown DC after city officials said they would address flood concerns around the National Mall. If the new floodplain maps went into effect, homeowners and businesses in the affected area would be required to purchase flood insurance and developers would need to adhere to more stringent design codes. The expanded flood zone included parts of Southwest from 3rd Street to South Capitol Street and Fort McNair.
Posted by SWill at 10:17 PM No comments:

According to this article from the Examiner, DDOT will establish a depot for low-cost private bus companies such as BoltBus, DC2NY, and the Chinatown buses that currently pick up and drop off passengers at different spots around downtown DC to a site at L'Enfant Plaza. A soon-to-be launched 1-year pilot program will require buses to queue just south of the intersection of 10th Street & D Street, a covered area below L'Enfant Promenade. By locating these buses away from busy streets near Chinatown and Dupont Circle, DDOT hopes to eliminate a safety hazard and bring more organization to intercity bus service. L'Enfant Plaza is connected to four Metro lines (the Red Line doesn't go to L'Enfant) and is proximate to I-395 and I-295. The 5A Metrobus currently takes passengers from the L'Enfant Plaza Metro to Dulles International Airport. This pilot program may be a prelude to the inter modal facility that DDOT wants to create at L'Enfant Promenade and Banneker Overlook to better connect the National Mall to the Southwest Waterfront.
Posted by SWill at 8:59 PM No comments: 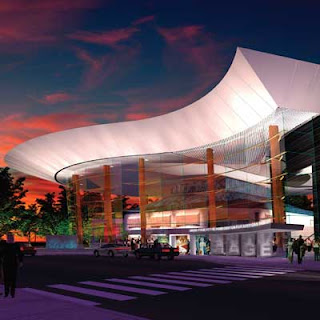 Here's another webcam, but this one shows the progress being made at the new Arena Stage at the Mead Center for American Theater, located at 6th Street and Maine Avenue. Arena Stage is less than two blocks away from the old Waterside Mall and will bridge the new development at the mall and Marina View to the East with the redeveloped watefront to the West. In addition, this building will be a striking architectual landmark in Southwest DC. Designed by Bing Thom Architects, the new Arena Stage should be ready by Fall 2010. In the meantime, performances are being held in Crystal City and The Lincoln Theater. 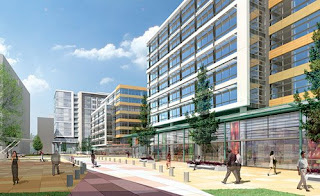 Two webcams have been set up showing the excavation progress at the Waterfront site over the past eight months. Demolition looks to be just about complete at the old Waterside Mall, a failed town center development built in the sixties. Piledrivers are still on site as excavation is ongoing. The Office of Tax & Revenue and DCRA are already signed up as tenants in 500,000 SF of office space that will be part of phase one of this redevelopment by Forest City Washington and Vornado.
Posted by SWill at 8:44 AM No comments:

Two Sites Made Available by the DC Government 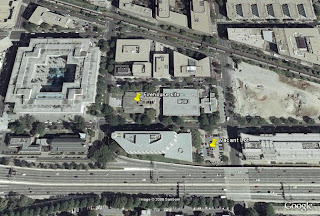 According to this article from the Washington Business Journal, the DC Government is soliciting development proposals for two sites (one at the SW corner of 4th Street & E Street and the other at the SW corner of 6th Street & School Street). The 4th Street site is a vacant lot while the other houses a fire station. A new firehouse must be part of the design for one of the parcels, or in the vicinity of the sites. While there are no specifications of what must be built there besides the fire station, that area of the neighborhood is dominated by office buildings, so I would imagine whatever is proposed will be more of the same - unimaginative office buildings with a sandwich shop or drycleaners as ground-floor retail. However, there are several office buildings either under construction or vacant near the sites, including Patriots Plaza, Capitol View, and Constitution Center, so who knows when anything would get built on these sites. At least the 4th Street site could support a sit-down restaurant on the ground floor. There are hundreds, if not thousands of workers nearby - NASA is across the street, the new forensics lab will be built across the street, as well as other existing federal tenants nearby. There are also residents as close as a block away who are yearning for more retail options in the neighborhood.
Posted by SWill at 10:50 PM No comments: